The Best Royal Wedding Dresses of the Last 70 Years

An inexhaustible source of wonder for us commoners, royal weddings offer us a glimpse into a world filled with Dior-embellished grace and Manolo Blahnik heels. The central figure of these lavish nuptials is, of course, not only the bride, but the dress she decides upon. In lieu of Meghan Markle’s upcoming wedding to Prince Harry, here’s a look at some of the most extravagant royal wedding gowns from the last 70 years and the stories behind them.

Designer Norman Hartnell had the honor of designing Her Majesty’s rich duchesse satin dress, which drew inspiration from Botticelli’s painting Primavera. The dress was made of silk from China (not Japan or Italy, given the proximity to World War II) and was intended to symbolize “rebirth and growth.” The queen famously saved up ration cards to pay for the dress, which took 350 women seven weeks to create.

1948: King Michael of Romania and Princess Anne of Bourbon-Parma

The princess, a former Macy’s salesgirl and volunteer for the French army during World War II, donned a light ivory gown with a lengthy train for her wedding to King Michael of Romania. Although the Romanian king and queen were deposed by communists and weren’t actually able to enter Romania until a three-day trip in 1992, BBC reports that they still remained popularâ€”even lovedâ€”by the Romanian public.

The last Empress of Iran opted for a custom Christian Dior wedding gown. Thirty-seven yards of silver lamÃ© embellished with 20,000 feathers and 6,000 diamonds were used to create the opulent number. 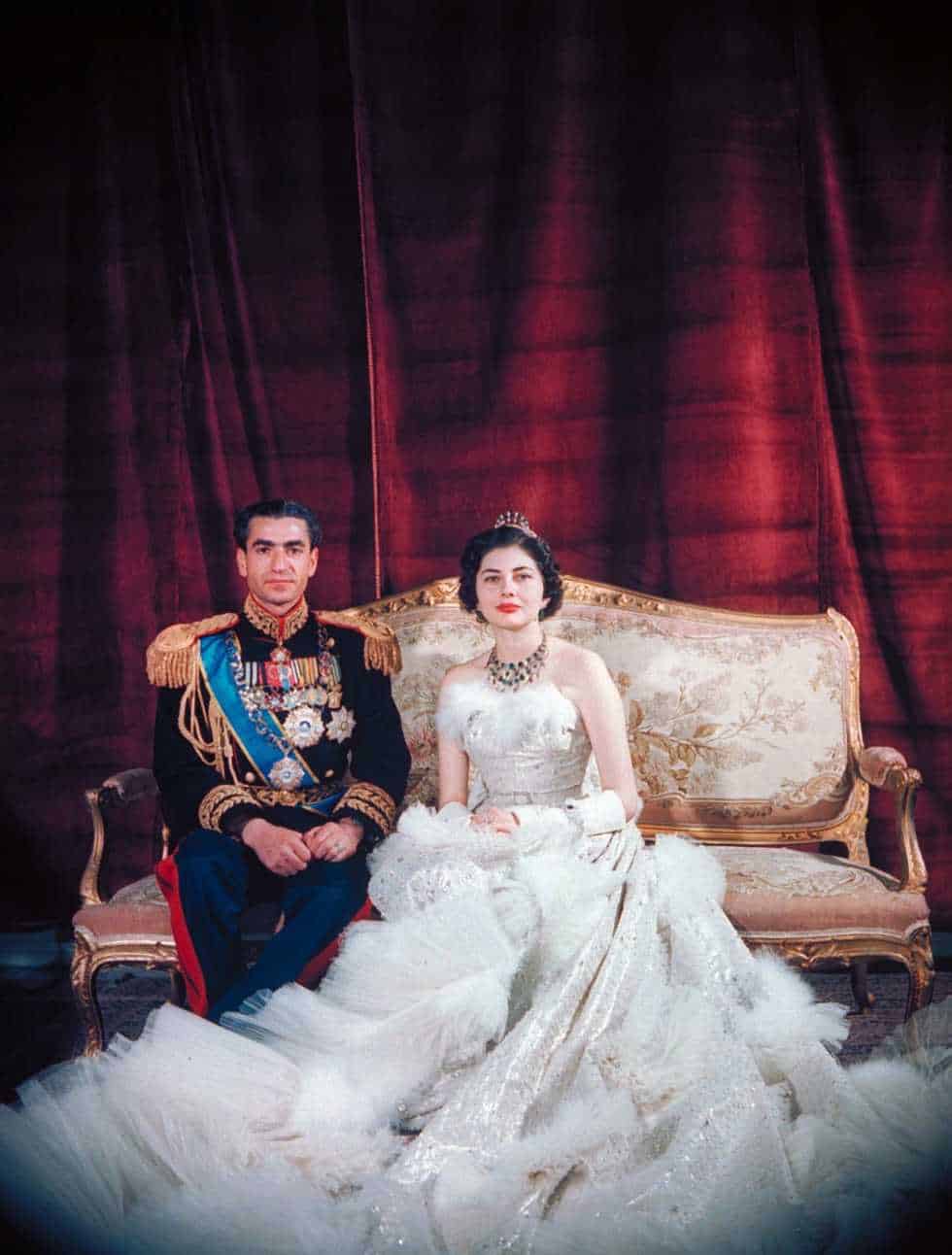 Often referred to as America’s royal family, John F. Kennedy’s wedding to Jacqueline Onassis was one of the 20th century’s most high-profile nuptials. Ann Lowe, a relatively under-the-radar designer from Alabama, made Jackie’s stunning gown. Making Lowe’s creation all the more impressive is the fact that a flood nearly destroyed the dress just ten days before the wedding. (Luckily it wasn’t harmed.)

Grace Kelly wore a gown by MGM costumer Helen Rose, who had dressed her for her films High Society and The Swan. The most expensive dress ever made by Helen Rose, the gown used lace that was over one hundred years old, as well as 25 yards of silk taffeta, and 100 yards of silk net. Kelly’s famously glamorous dress inspired bridal looks for Kate Middleton, Kim Kardashian (in her wedding to Kris Humphries), and Ivanka Trump.

Queen Fabiola opted for a drop-waist dress made of ivory satin with white mink trim. Designed by none other than CristÃ³bol Balenciaga, the founder of the Balenciaga fashion house, the dress is currently on view at the Balenciaga Museum in Spain.

1966: Princess Beatrix of the Netherlands and Claus van Amsberg

The bride sported a slender, high neckline gown with a lengthy train made by Caroline BergÃ©-Farwick of Maison Linette, a couturier to the Dutch royal family.

Like her sister (Princess Anne Marie), the reigning Queen of Denmark opted for a gown by JÃ¸rgen Bender. The silk dress featured a square neckline and a lengthy train.

Simple in its architecture but elegant nonetheless, Sonja Haraldson’s gown was created by Molstad, a clothing store in Oslo.

The fashion icon opted for a wonderfully unconventional wedding dress by Marc Bohan of Dior for her wedding to Prince Egon, a member of Germany’s aristocratic FÃ¼rstenberg family. Three months pregnant at the time of her nuptials, Diane accessorized the loose, cotton dress with a belt made of colorful ribbons. Admiringly, Prince Egon credited Diane for making the von FÃ¼rstenberg name famous in a 1981 interview with People â€” years after the couple’s divorce.

Dior’s Marc Bohan designed Silvia’s minimalist, floor-length gown for Sweden’s first televised royal wedding. The bride accessorized notably, to say the least, wearing the Cameo Tiara that had been gifted by French Emperor Napoleon to his then-wife Josephine in the early 19th century. Fellow history nerds: learning how exactly this crown fell into the hands of the Swedish monarchy makes for an actually pretty fun time.

Princess Caroline, Grace Kelly’s daughter, wore a 70’s-era dress with a floral crown for her first wedding (she would have two more).

For her enthronement ceremony to Crown Prince Naruhito, Masako Owada wore a juni-hitoe, literal translation “12-layered garment,” the most elegant and complex type of kimono worn exclusively by court-ladies in Japan. Here, a picture of the bride in a more western-styled wedding gown before the Choken-no-Gi (First Audience Ceremony).

The turn of the millennium saw Panama native Angela Gisela Brown become the first person of known African origin marry a member of a reigning European dynasty. While making history, Princess Angela looked beautiful, donning a gown she designed herself.

The first commoner to marry into the Royal Family of Lesotho in the small African country’s modern history, Queen ‘Masenate Mohato Seeiso’s wedding had over 40,000 guests in attendance at a Maseru football stadiumâ€”including none other than Nelson Mandela. The queen wore a jewel-encrusted, long-sleeved gown for the occasion.

A wildly underrated, real-life Cinderella story, Mette-Marit Tjessem was a single mother and waitress prior to becoming Norwegian royalty. Mette-Marit met her Prince Charming (Crown Prince Haakon, to be technical) years before she had her first child at a music festival. (!!!) In true happily ever fashion, the two eventually reconnected and wed. Here, the Crown Princess is pictured in the understated-yet-opulent wedding dress she wore by Norwegian designer Ove Harder Finseth.

Elsewhere in the world during the beginning of the new millennium, another monarchy signaled a progressive break away from tradition by way of royal marriage: this time in Morocco. Princess Lalla Salma became the first wife of a Moroccan ruler to be publicly acknowledged and given a title. The engineer-turned-Queen dressed in a lavish caftan, the traditional Moroccan dress.

Technically, this one is not a royal wedding as Princess Nori of Japan left behind the world’s oldest hereditary monarchy to marry commoner Yoshiki Kuroda, a government official she met as a child. The only daughter of Emperor Akihito, the princess is now Mrs. Sayako Kuroda and lives in a rented Tokyo apartment. For her wedding day, she wore a brilliantly minimalist, A-line dress with satin gloves and a pearl necklace.

For Camilla Parker Bowles’ long-awaited wedding to the apparent heir of the British throne, she wore a light-blue chiffon dress beneath a blue-gold embellished dress coat-both by designer Anne Valentine. Rather than wearing a crown, Camilla went with an intricate headdress made of golden feathers by Ellen Tracey.

For her wedding to her personal trainer and gym owner Daniel Westling, Crown Princess Victoria of Sweden wore an off-the-shoulder gown designed by PÃ¤r Engsheden. Victoria is the heir to Sweden’s throne andâ€”fun factâ€”is also 196th in line to the British throne through her father, a third cousin of the Queen.

Although this was not the biggest royal wedding of 2011 (you know what’s coming next), Charlene Wittstock’s Giorgio Armani gown is far too glamorous to be skimmed over. 2,500 hours and 80 meters of silk organza reportedly went into creating the former South African Olympic swimmer bride’s iridescent off-white gown.

Her Royal Highness the Duchess of Cambridge wore a nip-waisted and long-sleeved gown designed by Sarah Burton of Alexander McQueen. It’s been reported on the official royal-wedding website that the needlework craftsmen who handled the fabrics in Middleton’s dress and accessories washed their hands every thirty minutes. An estimated 2 billion people around the world saw photos of the British Royal Wedding and Kate’s stunning $400,000 dress.

The fifth child of the Sultan of Brunei (one of the wealthiest men in the world), Princess Hajah Hafizah Surural Bolkiah dazzled in a wedding dress that was practically dripping in crystals.

For her 500,000 euro wedding to the heir of Luxembourg’s throne, the Belgian duchess wore an ivory Elie Saab gown with structured tailoring and elaborate detailing. The dress featured three-quarter length sleeves, a silk tulle veil, and a 13-foot long train.

American supermodel Kendra Spears wore an entrancingly elegant sari in ivory and gold from Manav Gangwani’s “Timeless” collection. The former face of Prada’s AW 2009 campaign gave kudos to Naomi Campbell for introducing her to the Indian designer in a tweet from the big day. Rather notably, Spears’ groom is the eldest son of the Aga Khan IV-the imam (spiritual leader) of the Shia Imami Ismaili Muslim world.

The wedding ceremony of Princess Hayu and Prince Notonegoro, a United Nations worker, spanned three days and saw many stunning, elaborate outfits and costumes in accordance with royal Indonesian wedding traditions. For the bathing ritual element of the ceremony, which is done before the formal wedding vows takes place, the bride wore a cape of intricately woven flowers.

Princess Madeleine, the youngest child of the King and Queen of Sweden, wore an off-the-shoulder Valentino gown for her wedding to financier Christopher O’Neill.

Journalist Elisabetta Rosboch wore a Valentino gown with delicate, sheer details for her wedding to the nephew of reining Belgian monarch King Philippe.

The German princess, a member of Germany’s Princely House of Thurn and Taxis, selected a brazen, scoop-necked gown painted with golden roses.

Technically, the German House of Hanover hasn’t ruled over a kingdom in over a century; but, Prince Ernst August of Hanover, Jr.’s wedding to Ekaterina Malysheva was still an undoubtedly royal affair. Lebanese designer Sandra Mansour dressed the Russian-born, London-based bride in a gown composed of Chantilly lace, beaded details, and hints of light pink. Fun fact: the royal bride happens to be a fashion designer herself. She runs a high-end jumpsuit line called EKAT.

These AirBnB Reviews Were So Bad We Wouldn’t Stay There if They Paid Us
Shannon Quinn - January 21, 2023

Home Hacks that Will Upgrade Your Life and Save You Thousands
Julia Clum - January 12, 2023
Advertisement
Advertisement