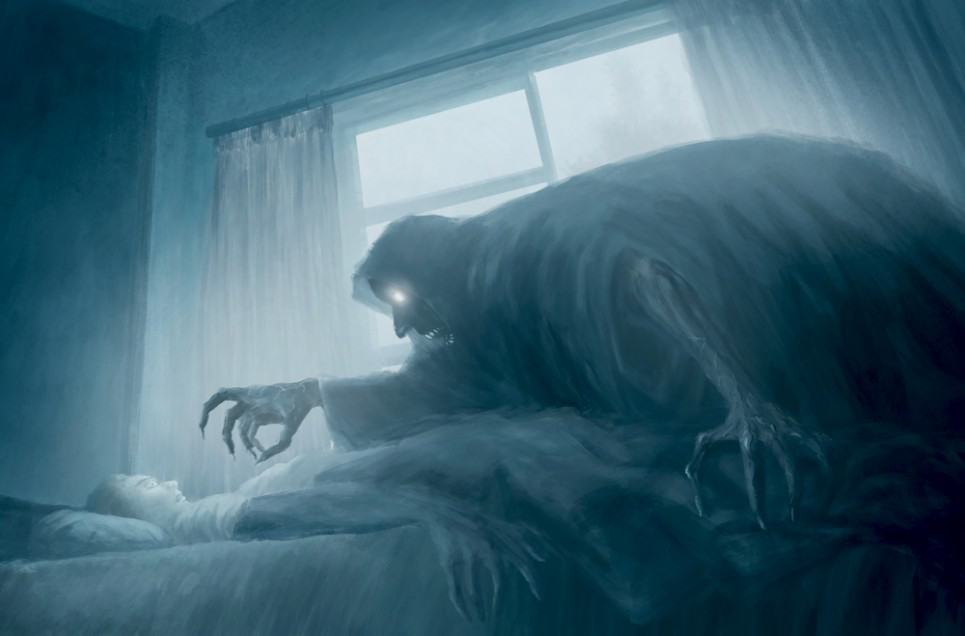 A Redditor named DenHolme2 tells a scary story: “When I was around 9-10 years old, I was living with my dad. He has a very large terrace house built in the 1800s, every so often there would be an unexplainable event happen, such as footsteps when there’s no one there or voices. On the night this happened, it was just my dad and I in the house, my sister was staying with my mum at the time.”

“I woke up and noticed the door to my room was wide open. Normally, I sleep with it closed. I then became aware of a large 7ft tall shadow-like figure watching me from the end of the bed. When the figure noticed me it seemed to melt into the floor and the door to my room slammed shut. Understandably, I was slightly traumatized by the whole experience. I asked my dad the next day if he was in my room and he denied any knowledge of the event. He’s not the type of person that likes jokes. I still have no idea what happened that night.”

One reddit user named xCyanotik explains a secondhand ghost story. “So, my ex girlfriend’s mom said she used to live in a haunted house. Ironically enough, it was the house next door to the one they were living at. Story goes that when she was a kid living there they had 2 separate ghosts, one upstairs, the other downstairs. The downstairs one was more subtle. It would move around little things, cast shadows along the windows and walls, subtle creepy things that would bother someone. The one upstairs on the other hand was apparently trying its damndest to make itself known. Slamming doors, stomping across the floor, walking up and downstairs.”

“The story that made me weary about the house (I’m a firm believer in the paranormal) was that when my ex’s mom was painting the upstairs hallway wall. The wall was originally red, painted over white. Well, they wanted it to be a light blue. So she started to paint it and she said that while she was painting a certain spot, it started to bleed red through the blue and no matter how many times she painted it, the blue would not stay as the red would bleed through it. I’m not sure the truth in all of this, but walking past that house always had me looking at windows hoping to see a face or shadow in the window.”

A Redditor called TheCaptainHat shares his potential doppelganger experience. “When I was younger, my parents would frequently go run errands in the neighboring city and be gone most of the day from morning to night. Our living room was in a spot where you would have to walk through it to get from the back door to reach either the front door or my parents’ room. You would walk between the couch and the TV while doing so. So I was home alone and my dad came through the back door, walked in front of me as he crossed the room and entered his and my moms room. Then he came back out, walked across my field of vision once again, and left through the back door.”

“He didn’t look at me, look at the TV, or really do anything besides walk across the room in both directions. When I asked him what he came home for or if he forgot something he honestly had no clue what I was talking about. They were an hour and a half away and coming home for something they forgot would have not made much sense. He was also wearing different clothes when I spoke with him compared to when I “saw” him earlier. Such a strange experience and I only saw it that one time.”

A user by the name of Doctor Death did an entire AMA or “Ask Me Anything” where he claimed to have lived in a haunted house. He was open to answering any questions. “Before I lived in that house I didn’t believe in the paranormal. But after only a few days of moving into that house, we started having doors slam shut, even though there was carpet and you HAD to physically move the doors. The cabinets in the kitchen would open and close. Things that you sat on the counter would sometimes slide off very violently. My one friend’s room was like a freezer sometimes. You could actually see your breath, but it would only last for a minute or two before warming up again. He slept on the couch a lot.”

“The owner of the house- my roommate’s father- was a very wealthy doctor who collected old art. Right in the  front of the house was a huge painting of some travelers being robbed and killed by highwaymen. Multiple people saw the man depicted as being killed in that painting walking through the house like he was lost. That painting was evil as hell, it gave me the creeps like nothing I have ever seen before or since. Many times we heard voices of what sounded like people whispering to each other. I actually felt someone touch me from behind many times and there would be no one there. It really made you question your own sanity. If it weren’t for others having the same experiences.”

A woman named FitNurse6 on Reddit shares the story of the ghost of a little boy in her house. “When I was 10 years old, we moved into a new house. My parents let me stay home from school while they unpacked, and I was preoccupied with coloring books. In my brand new crayons pack, the blue crayon was missing. I went downstairs to check out the basement, and my blue crayon was next to the hot water heater. Scribbled on it there, it said ‘Hi, Katie, I’m Kevin’. I was so confused why my name was there. I started school and my new classmates were like, “Do you live in Kevin’s house?! Your house is haunted!!” It turned out that Kevin was an 8 year old boy that lived in our house prior to us. He got hit by a car in the front yard.”

“Kevin would write notes if you left out a pen and paper, open and close doors, adjust the thermostat and turn on Christmas music. We had a swing set in the backyard. Even on the hottest days of summer, the left swing would be moving back and forth. When I was a teenager, I was very upset and considered committing suicide during Christmas break. Out of nowhere, the police just randomly showed up at my house. The policeman said he was patrolling our neighborhood and felt very strongly that there was something wrong at our house. He stopped by just to make sure everyone was okay.  I’m absolutely certain Kevin had something to do with it.”

2. The Girl in the Attic

A user called EconomyCactus recounts the ghost of a little girl living in his house. “The attic of my childhood home had two large closets that ran along the entire wall on both sides. It was essentially a 30-foot long crawl space. One day, a friend and I went crawling from one side to the other with flashlights. Then I saw a girl sitting there, in the corner. I was beyond terrified. This girl looked normal, had blonde hair, a nice dress and seemed friendly. I stayed silent, and got out of the closet. Told my friend what I saw, and he said he didn’t see it. But he had a strong feeling come over him, and he didn’t want to go back in. My parents would occasionally send me up to the attic to get something, and the crawl space doors would swing open.”

“I would lose toys and wouldn’t be able to find them anywhere. Months later, my parents would be getting the Christmas presents out of the attic and would find my missing toys in the crawl space. When I was 8 years old, I leashed up my dog to go take on the monster in the attic. My dog, usually up for anything, REFUSED to go off the top step. My parents never believed me with all the weird things that happened. I would get blamed for things. Leaving lights on, toys all over, things I knew I didn’t do. We moved out when I was 10. Not a week passes before the new owners call us to ask if the house is haunted. The daughter sleeps in the attic, and she says that she has been playing with a blonde haired girl at night.”

1. The Guardian of a Haunted House

A Reddit user called ICountFish had a house sitting nightmare. “I used to live in a big 6-bedroom house by myself, because I was looking after the place for my boss. The first couple of months were fine. But when winter came, I started hearing things coming from the second floor. I lived pretty much exclusively on the 1st floor. It started with little bumps, bangs, and footsteps coming from above. I had been up to the second floor to check up on it. One unfinished room was a sort of walk-in closet for one of the upstairs bedrooms. The door of the room was open when I went up to investigate the noises. So I shut the door and locked it. Two nights later, more footsteps. The door that led to the unfinished room would not stay closed or locked.”

“I tried everything. Eventually I pushed the bed up against the door to keep it from opening. That seemed to work, except that the door would continue to unlock on its own. As time passed- I would hear noises all over the house. Mostly footsteps, but the occasional THUMP. I cannot explain how horrifying it is to hear footsteps up and down the hall door during your morning shower. Eventually, I moved out, but another employee moved in to take my place. His stay there only lasted one month. The story he told me is that he was shaving one morning and he heard a SLAM like someone dropped a heavy stack of books right outside his bedroom door. Then heavy footsteps like someone running down the hall. He won’t stay there anymore. After that, no  one in the company will live in the house.”