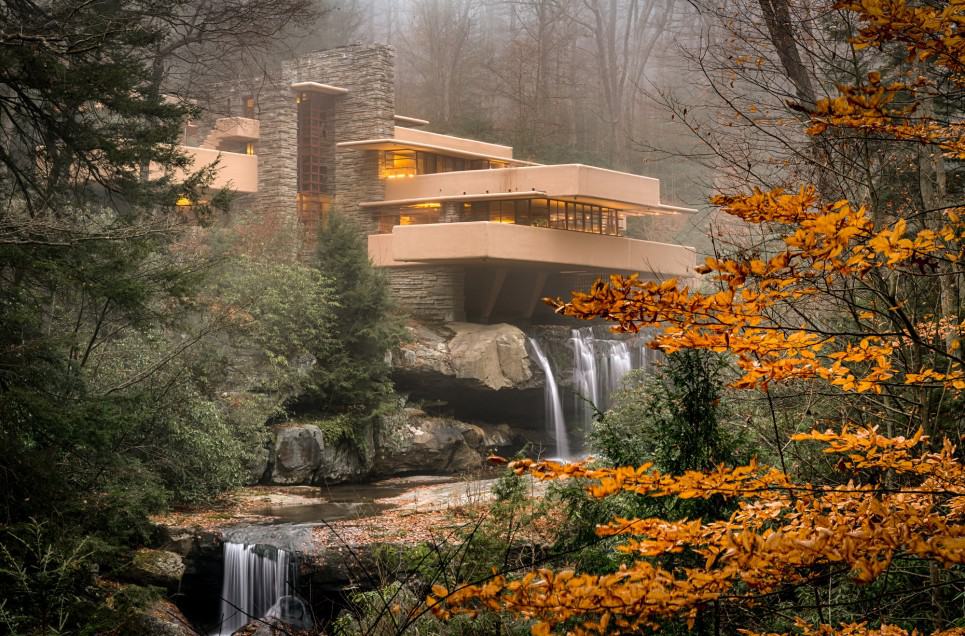 Also known as the Richard Lloyd Jones House, Wright built this home in Tulsa, Oklahoma in 1929 for his cousin Richard Lloyd Jones, who was the publisher of the Tulsa Tribune. The 10,000 square foot home was designed in the Prairie Style and is just one of three Frank Lloyd Wright homes built in Oklahoma.

Westhope is distinct for its striking glass and concrete exterior. Many townspeople were baffled by the look of the home, buy Wright was incredibly proud of his design and considered it “even more beautiful than he had imagined.” Since April 1975, Westhope has been listed in the National Register of Historic Places.

Also known as The Ship House, the F. F. Tomek House is a clear example of Frank Lloyd Wright’s Prairie School style. This home resided in Riverside, Illinois and was constructed in 1906. Its design serves as inspiration for Wright’s Robie House and includes furniture designed by Wright himself.

Three stories comprise this home, with the main floor housing a billiards room, the second floor being where the bedrooms are and the third floor being much smaller than the others. The home’s interior is inspired by Japanese motifs and features a lot of glass art, which was typical for Wright to include in his designs. The F. F. Tomek House underwent significant renovations in the 1970s and was named a National Historic Landmark in January 1999.

Commonly known as the Lowell Walter House, this home is located in Iowa’s Cedar Rock State Park. Wright originally built it in 1948 as the summer home for Des Moines, Iowa businessman Lowell Walter and his family. Cedar Rock has the tadpole shape typical with Usonian homes features the living and dining spaces in the “head” and the bedrooms in the “tail.”

Wright built the home on 11 acres along with a two-story boathouse and outdoor hearth. The floor-to-ceiling glass walls provide a gorgeous view of the valley surrounding the home. Thanks to several skylights and a clerestory in the center of the home, the living spaces are always filled with natural light. The Lowell Walter House is preserved by the Friends of Cedar Rock and open to the public for tours.

Considered “Michigan’s Prairie Masterpiece,” the Meyer May House was built in Grand Rapids in 1908. This home is another excellent example of Frank Lloyd Wright’s Prairie School style. It was designed to allow plenty of natural light to stream into the living room via large windows and skylights. It also has a lot of space for terraces, planters and perennial gardens. Additional bedrooms were added onto the second story in 1922, and servants’ quarters were included downstairs.

Frank Lloyd Wright was commissioned to build the Eugene A. Gilmore House in Madison, Wisconsin in 1908. Also known as the Airplane House, this home is located close to the University of Wisconsin Law School Campus. The structure falls into the category of Wright’s Prairie Style even though it has more of a vertical feel than most of the Prairie Style homes.

The sharply-pointed balconies that project from the home’s dining room give it an appearance akin to a plane preparing for take-off, which is where the moniker Airplane House originates from. The living rooms are located on the top floor, giving residents an excellent view of Madison, Wisconsin and the Four Lakes Region that surround it.

Built-in 1952 in the scenic Arcadia neighborhood of Phoenix, Arizona, Frank Lloyd Wright designed this home for his son David and his wife, Gladys. The impressive structure is 2,500 square feet and made of concrete blocks. It sits among orange groves facing Camelback Mountain. The house is uniquely designed in a spiral shape to capture wind and cool the home down. It’s one of three Frank Lloyd Wright designs shaped like a spiral and is considered a precursor to the Guggenheim Museum.

This home is widely regarded as Wright’s final residential masterpiece because of its innovative design and beautiful interior. David and Gladys Wright lived in the home until their deaths, David in 1997 at age 102 and Gladys in 2008 at age 104. The David & Gladys Wright House is currently on the market for $12.9 million.

Frank Lloyd Wright designed the William and Mary Palmer House in 1952 for a University of Michigan economics professor and his wife. It is located on three lots positioned at the end of a quiet cul-de-sac. Conveniently, it’s less than a mile from the University of Michigan. The Palmers purchased the property in 1949 and hired Wright to design the home after being impressed by his Affleck house.

Another Usonian home, this structure is 2,000 square feet and situated on a hillside. The primary construction materials are brick and red cypress. Like many of Wright’s Usonian designs, the house has no right angles. Its shape is triangular, with three wings extending off of a central entryway. The property also includes a garden house in the back that’s home to a collection of furniture designed by Frank Lloyd Wright.