Retail Employees Tell Stories About How They Were Scammed by Customers 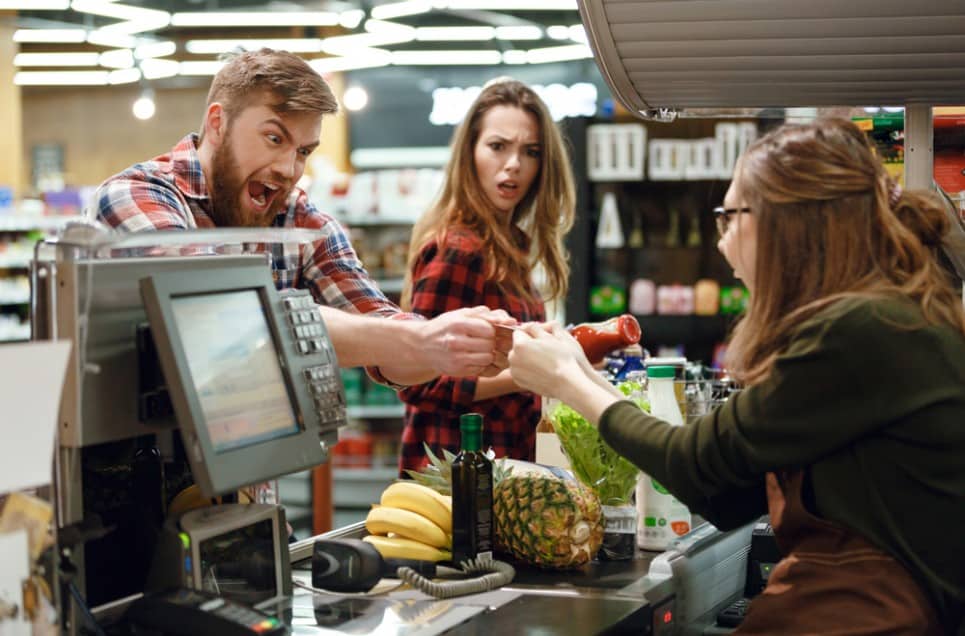 11. That’s Not How Banking Works

HawaiianBrian tells a story of working fast food in the 90’s. “Worked at Arby’s as a teenager (this was around 1990). A guy comes in, orders a sandwich and fries, and wants to pay with a check. This being the olden days, people paid with checks all the time. But this guy tries to tell me it’s ‘easier for the bank’ if he makes it out to himself instead of to Arby’s because… Well, he fired off some convoluted, off-the-cuff rant designed to fool me into buying the story. I was young and naive, but not that naive. He got mad when I denied him, called me stupid. So I asked if he’d like to talk to the manager and he agreed. Three minutes later my manager is giving the guy a stink eye and the dude leaves with no sandwich. Nice try.”

This Petsmart employee has deleted their Reddit account, but the retail story still remains. “I’m not usually at the register, but when the store I used to work at first opened, they would send out coupons to specific people if they had PetPerks. Well, someone shared their coupon online, which was for a free bag of dog food. What proceeded was a mass of people coming in the next few weeks attempting (and succeeding) to redeem the coupon, as we didn’t want to start off on the wrong foot after newly opening. Anyway, I get put on the register and this woman comes through with 12 bags of dog food and 12 coupons. We can’t actually do that on the same purchase, and usually when someone does that (having two coupons), we just do two different transactions. It’s whatever.”

“But this lady has 12. I’m lazy so I called my manager over to deal with it. The manager tries to explain to the woman that the coupons aren’t technically valid as it’s for a specific person for one bag. Woman keeps pushing on the fact that she physically has the coupons so they must work and acts like she doesn’t understand why they won’t. Eventually the manager says, you know what? We’ll do it but only for 6 bags. Woman throws a fit and leaves the entire cart. Coulda got 6 bags free but nope. Manager said she’d seen the woman doing the exact same thing at Dollar General the day before.”

PlutoCouldBeAPlanet tells a retail story about working at a bowling alley. It just goes to show that most people aren’t prepared for management to call their bluff.

“Had a guy come to the bowling alley I worked at wanting to play in our arcade. You have to put money on a card to play the games cause we have card swipers on all our games. Tickets go straight to the card. He walks into the redemption store and goes, ‘Hey man I just put $20 in the teller and it took my money and is saying I didn’t put anything in. Can you give me a card with $20 on it?’ Well that’s weird, let’s check it out. I grab a manager and walk over to the teller where the manager proceeds to open it up and take out the cash box and would you look there, not a single bill, hmm weird. ‘Uhhh, do these other tellers work?’ Yeah bud, all the tellers work just fine.”

Ninjacat01 tells a story of how a woman got away with never paying for a facial. Honestly, I’m surprised this doesn’t happen more often. “Customer came in for her 1 hour facial appointment to try our skincare brand in a department store. It was $75, or you could purchase products to that value or above. She came out from her facial, pampered, requested the whole range, then exclaimed she had left her credit card in her bag which she had left in the car. Then she quickly said, “I’ll be back in five” – and never returned. We caught on pretty quickly, but she had disappeared, and the phone number she had given us was fake.”

7. Tweaking is a Red Flag

This sad story by Moogula1992 is probably something that happens more often than you think. “A guy comes into my pharmacy to fill his son’s Adderall prescription. Guy is super twitchy and son is chill as could be. For all controls we are supposed to run a report that shows every where in the state they have filled any. Of course the report is a mess. Multiple pharmacys, multiple scripts, multiple doctors. All the red flags. To top it off an Adderall script within that week had been filled so we really couldn’t fill this one.”

“Dad comes back, we tell him that we can’t fill it and dad starts going on about how his wife must have filled it but they need some for today blah blah blah. We decline and his last words to use are ‘My son needs them for a birthday he has to go to today. Can’t you help?’ No dude we can’t help. You’re clearly taking your son’s pills. Get help and stop using your son to get high on prescription medication.”

6. This Must Be a Rough Neighborhood

KeetoJM tells multiple stories of retail nightmare scenarios. “Had a guy try to return 2 Sega CD games for cash. Problem was they were wrapped in Saran Wrap. And then had the gall to exchange them for properly wrapped games so he could go across the street to Walmart and return them for cash there. Him and his buddy must have really needed beer money.”

“Also have seen people try on new shoes, put the old ones in the box, and walk out with the new ones. Had an old man act like he was pulling a gun out of his waist just to get away from loss prevention. And one of my favorites- Had the two women grab a bag from luggage and put all of the rolls of film in the bag. Then try to ditch the bag because we were following them.”

HermesCat tells a story about how a customer tried to score a free iPhone by pretending about losing one. “I once had a dude try to score a free iPhone. He came into the department I worked in, and started describing this vague iPhone to us, saying he’d lost it in here earlier. No other details were given, like phone case, or specific color, just an iPhone.”

“Further questions were asked about where he thinks he might have left it in here and he just went quiet and said, ‘It’s fine, actually. Maybe somebody else has it.’ And left. Our opinion is he knew that sometimes stores will keep people’s phones that they find until the owners come back and then they hand over the phone. He wanted to score a free iPhone.”

A department store employee called RocketSLC helped to apprehend a woman who was attempting to steal a Smart TV. “When I was working as an electronics cashier, I asked a woman if she needed help buying a TV. She said no thanks, and placed a smart TV into her cart. I asked her if she wanted to make the purchase in electronics, and she said she wanted to pick up a couple more things. I went to help another customer when I realized the woman was rushing towards the front of the store with the TV. Immediately, I radioed loss prevention that someone was trying to run out with a TV. They stopped her at the door.”

“When I worked on a grocery checkout, a woman pulled a barcode label from a container of $4 tinned fruit and stuck it over the barcode of a $25 container of medjool dates. She pretended that she didn’t do it. Another time a man carried a $30 bag of dog food to the customer service counter without paying for it and asked for a refund. My manager gave it to him even though we both knew he had stolen it while we watched him.”

“Oh, and another time a group of people were using fake credit cards to steal. Not sure exactly how it worked but they ended up typing in different card numbers into the card terminal while another dude tried to distract you. These guys were super friendly and chatty and probably thought I was young and dumb. But I caught them trying to take off with about $500 worth of groceries. They were all like, ‘Just let us go and get some cash out, we’ll be back soon to pay’. They never returned and my manager gave me a box of chocolates for picking up on it. Proudest moment of my retail career.” Good job, PuddingandP1e.

Supergazm literally saved two people’s lives in this story. “I ran the gun counter at a store. One day a sketchy guy came in to buy a handgun. I didn’t like the way he was acting, and the way he was answering my questions. So I decided that I was not going to sell him a gun. My store is strict about this. If I didn’t feel comfortable, I could deny the sale and there’s nothing he could do. He could call managers and HQ and complain, but they will always side with me. The man hands me his ID to start the paperwork. I always let them start the process so that I have names and addresses. His name was really familiar. I had sold a gun to someone with the same name the day before. But it wasn’t him.”

“I let him completely fill out the form and compared it to what I had from the day before, and asked him how he liked the gun he purchased yesterday. That took him by surprise, and I knew what was happening. I called the code words to have management call the police without suspicion. The man was using his father’s identification. When the police arrived, fear washed over his face. This guy already had a violent record, and is now in prison for lying on federal documents, violent felon in possession of a handgun, and identity theft. The next day, the police came back and told me that he admitted to trying to buy the gun to kill his wife and son. I had a little bit of a breakdown at work and sat in the breakroom for about an hour just thinking about the incident.”

This next story from BakingJingo tells you that if you’re trying to trick a cashier, don’t do it in the early morning when the drawers are perfectly balanced. “I worked at a Jewel many, many years ago. A man comes through with two 24 packs of Pepsi. It’s opening shift, so at that time we count our registers and confirm they’ve got the correct. We didn’t carry too much cash, and we all know how much is in the drawer to start the day. He ends up paying with a $100 bill for these sodas. I counted back his change with mostly 20’s, and I don’t know how he did this, but he shuffled them in his hand, and showed me that I supposedly short changed him. Now, I knew immediately that he was lying.”

“I told him that I would call a manager over and have them double check the register. The manager came, counted down the register and explained that the drawer was balanced, which means I didn’t short change anybody. But, if for whatever reason the drawer turned up $20 over at night, we could give him a call. The manager tries to take his info down and he asks for his name and the guy thinks about it and says ‘Steve… Bush!’ He left. We never called him. Even if we had – Steve Bush doesn’t exist.”