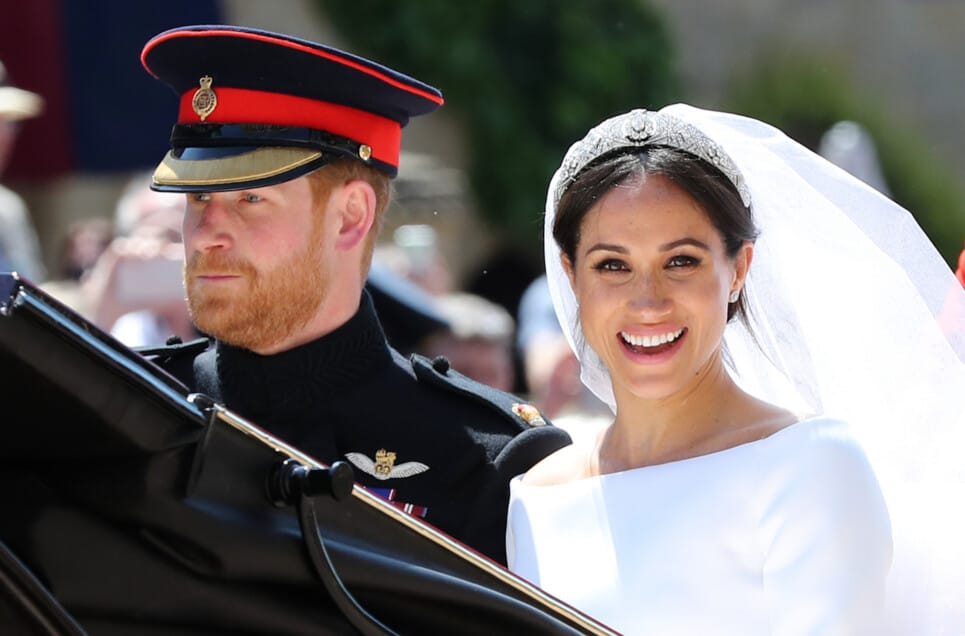 Photo: WINDSOR, ENGLAND - MAY 19: Prince Harry, Duke of Sussex and The Duchess of Sussex leave Windsor Castle in the Ascot Landau carriage during a procession after getting married at St Georges Chapel on May 19, 2018 in Windsor, England. (Photo by Gareth Fuller - WPA/Getty Images)

Many of you might recognize Rita Hayworth, who was a famous movie star in the 1930’s and 40’s. Her beauty and talent brought her to the attention to Prince Aly Khan. This was Rita Hayworth’s third marriage, so she chose to go with a more modest wedding dress for husband number three. This is traditional for second or third marriages, because white is supposed to be reserved for a virgin wedding. Rita’s wedding dress was inspired by Christian Dior’s 1947 New Look collection. The dress was in ice blue crepe. had long sleeves, a long skirt, and she topped it off with an elegant hat.

As you can imagine, the story was a heyday for the press. Cameras were flashing, because everyone wanted to know more about the Hollywood starlet who married a prince. If you’re curious, you can still watch the news coverage of their wedding day in front of the mayor when she became a princess. Unfortunately, this royal wedding didn’t spell out “happily ever after” for the actress. Rita was married to the prince from 1949 to 1953, which is when they divorced. She continued to act in films long after her divorce and eventual new marriages.

2. King Michael of Romania and Princess Anne of Bourbon-Parma in 1948

Once upon a time, Princess Anne of Bourbon-Parma was a Macy’s sales girl. She also served her country proudly, because she volunteered for the French army in World War II. When she was married, she transformed, because she is actually a real Danish princess. She wore a gown covered with rose colored tulle with an eleven foot long train that required 3 pages to carry it down the aisle! She was married to Prince Michael of Romania, who would later become the future king.

At the time, the King and Queen of Romania was deposed by the Communist party. Because of this, they weren’t even allowed to enter their home country until 1992. Since they needed to flee the country, both of them were married in Athens, Greece. Several royals from other European nations attended the wedding to show their full support. Many people in Romania still loved the royal family, despite the fact that it was now Communist. So they were still curious to know as much as they could about the royal wedding.

Last and certainly not least is the famous wedding of Queen Elizabeth II and Prince Philip in 1947. When people in the media simply say “The Queen”, they’re always referencing Queen Elizabeth II. At least, this is true here in the United States, because our nation was once occupied by the British.) There is even the TV series about her life called The Crown on Netflix, which includes a visual retelling of her wedding day. Obviously, you can’t have an article about royal weddings without Her Royal Majesty Queen Elizabeth.

Her Royal Majesty’s wedding gown was designed by Norman Hartnell, who created a dress made of duchesse satin as well as Chinese silk. At the time, the silk was purchased from China because it was the most politically correct thing to do. Since this happened not long after World War II, they kept away from both Japanese and Italian silks, considering that it was still far too soon to support them. The dress design was inspired by Botticelli’s painting Primavera. Queen Elizabeth even saved up her ration cards to pay for her own dress, but it was still far from normal. It took 350 women seven full weeks to work on and complete the gown.