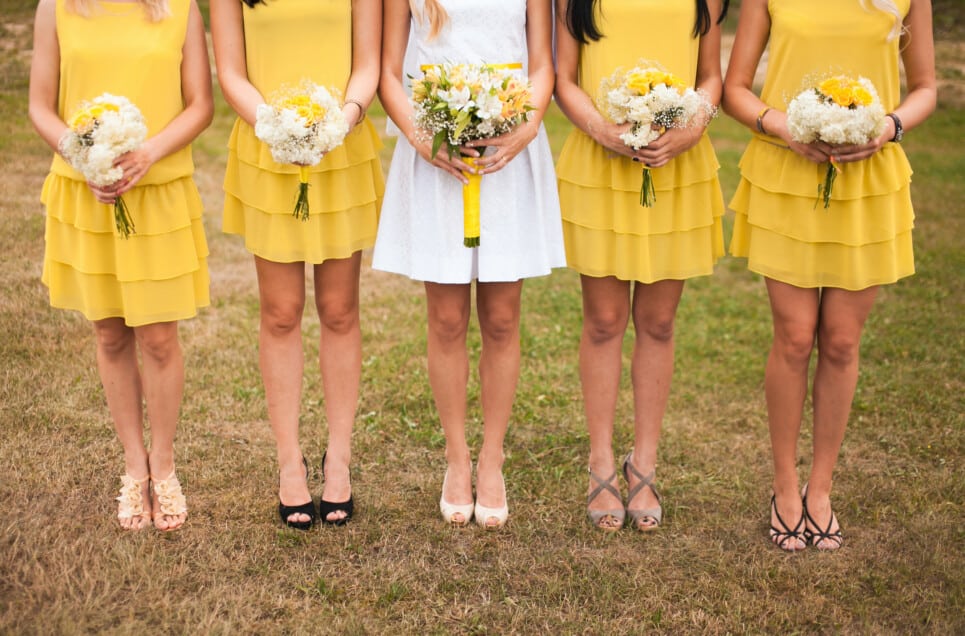 Blessed be the Fruit, Ladies

Nobody wants to look like they just got off the set of the Handmaid’s Tale. This dystopian story does not bode well for the women living in this twisted universe where male domination and female servitude are key. This hooded bridesmaid’s dress is definitely giving some creepy cult vibes though. And the pop up weird floral 70s print in red, white, and blue looks like the Handmaids are about to celebrate the Fourth of July. Of course, based on what we’ve learned about the history of the bridesmaids, they have been a sort of handmaiden to the bride to be. But let’s not overlook the groomsmen in this photo. Although somebody should have stopped the far right groomsman from wearing his hair like an early 2000s emo kid.

In some early traditions, the groomsmen were called Bride’s Knights, because they helped protect her—and her dowry, and her virginity—or because they assisted in her kidnapping. Given the likelihood that the bride’s family would attempt to retrieve her from her groom or get revenge—or that another suitor would try to take her, or she might try to escape—the best man stood right next to her at the wedding, at the ready with his weapon. Later, he was moved to the groom’s right side (possibly due to jealousy on the part of the groom). After the ceremony he stood guard outside the newlyweds’ bedroom or home.