What People Ordered VS What They Got Shopping Online 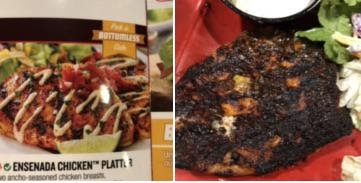 Okay, so this is not online shopping, but still disappointing. Chicken is one of those proteins that people must cook thoroughly, and a meal with undone chicken can result in a severe case of food poisoning. Although known for its in-house burgers and bottomless orders of fries, the popular food chain Red Robin dabbles in a few clucking specialties. The Ensenada Chicken features one or two pieces of grilled chicken cooked on top of the ancho grill, along with homemade salsa and salsa-ranch dressing. Customers also get their choice of two sides with their meals.

Presentation is critical, and this example is a case of much too done. When this lady ordered the meal after a visit to the restaurant, something was very wrong with the plate when it arrived at the table. The chicken was blackened entirely and tough to cut through, and the salsa was hardly recognizable (via Reddit). Some comments also seconded the sentiments with a “meh” and gritted teeth emoji (via Reddit).

5. Avengers Un-Assemble on this Canvas

Marvel Comics has had quite the renaissance lately. Thanks to big-budget films and television programs, superheroes are more popular now than they have ever been before. The Avengers consist of many recognizable heroes, including Captain America, The Hulk, Iron Man, Black Widow, Hawkeye, and many others. Die-hard fans are excited to get anything they get their hands on to support their love for these epic stories. Well, almost anything.

Masterbuilder1 took pictures of artwork he purchased from the site Wish and put them up beside what arrived in the mail (via Reddit). The biggest difference was that the one offered was mounted on a canvas, while the one sent was just a printout. While some commenters shrugged and said the original poster over-expected the result, others were sympathetic. The person wanted to send the photo back, but the shipping and handling to return cost as much. Thus, he decided to keep it (via Reddit). 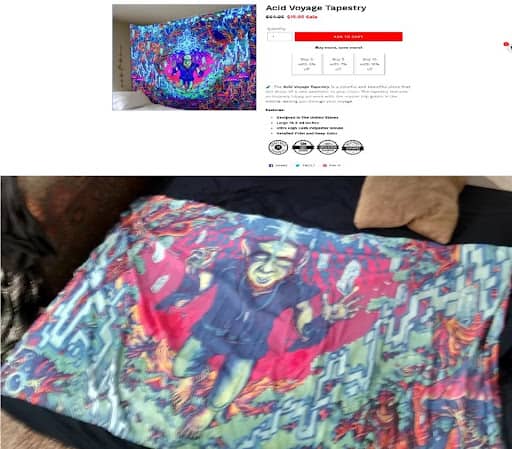 Here is another example of a gorgeous tapestry failing to meet expectations. Ackerman77 liked the quirky design featured on this acid tapestry (via Reddit). Furthermore, it is easy to see how psychedelic and cool. A closeup of the order information also promises “an insanely trippy artwork with the master rip goblin in the middle leading you through your voyage.” It also states that the tapestry was supposed to be large – 74-by-44 inches.

Well, the item that arrived left a lot more to the imagination. While the one in the advertising stretched across a wall, the one the user-posted barely fit alongside the couch. Not only that, but the design seemed faded and dull compared to the vibrant. Maybe the measurements were off because they counted the smaller goblin? One commenter suggested the original poster turn on a black light and “pretend you are smaller (via Reddit).” Keep reading for more online shopping mishaps! 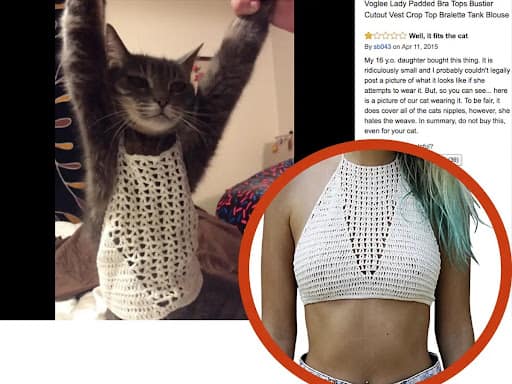 It is no day at the beach when you order something, and it does not come in the correct size. Swimwear can be difficult to purchase online, but no one thinks the sizing would be so off that it would fit a pet. A mother said her 16-year-old daughter bought a lace bikini from an online merchant and the size that arrived was much more than a size small (via ABC11). Rather than get angry over the misleading size, she decided to take a whole different approach and went viral in the process.

The mom took her complaint one step further by posting a hilarious and negative critique about the experience online. She posted the original advertised photo as well as another picture of the family cat in the bikini. The review said: “But, so you can see … here is a picture of our cat wearing it. To be fair, it does cover all of the cat’s [little parts], even though she hates the weave. In summary, do not buy this, even for your cat (via ABC11).” Now that’s the cat’s, er, um, bikini! 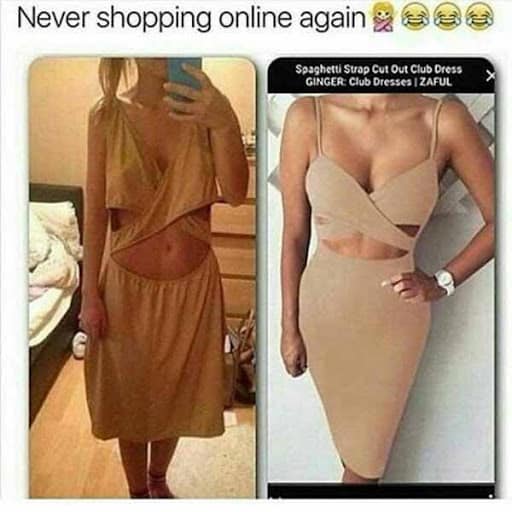 Every girl should have a dress that she can rely on. Nothing can fit you better than a well-made dress, and like bathing suits, the best results are hard to come by in an online store. You can accentuate curves and have fabric flair out to hide any troubled spots. However, when the purchase is shipped directly to you, you must rely on standard sizing to fit your body.

Unfortunately for this customer, what was on the digital rack did not fit her like she thought it would. After posting the two images, she put the text “Never shopping online again” with several sad emojis in a row (via Daily Sun). Sure, the dress on the model looks like it fit her like a glove. However, the nude dress falls off her frame (via Daily Sun). The peekaboo midsection droops far below her belly button, and the bust hangs off her shoulders. It is not as flattering, and it fails to cover her adequately. 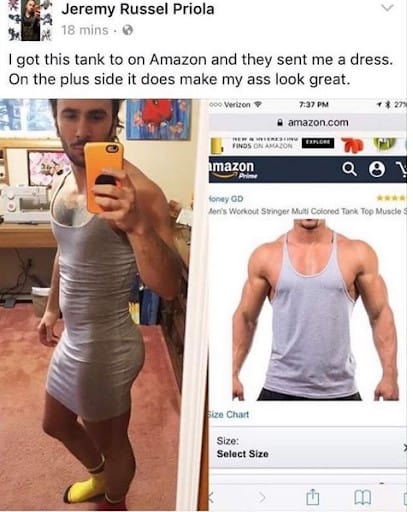 1. He Actually Loved His Accidental Dress

Even when it does not work out the way it is supposed to, you can still have a bit of fun with your predicament. Another dress failure, Jeremy posted on his Facebook wall an Amazon purchase that did not live up to his expectations. He purchased a muscle tank that he had hoped to wear during his workouts. While the model in the picture can wear the tank comfortably up to his hips, Jeremy discovered that there was much more fabric than he bargained for.

Jeremy took the opportunity and had some fun at his own expense. He posted a mirror selfie next to the product to show how oversized the tank was. He was able to stretch the tank down to his mid-thigh and posted the hilarious zinger about how the shirt accentuated his body in a way he hadn’t intended. “I got this tank from Amazon, and they sent me a dress,” Jeremy said in his comment (via Elite Daily). “On the plus side, it does make my [butt] look good (via Elite Daily).” At least this shopping experience brings a smile to his face. Will you contine shopping online even after seeing all of these crazy deliveries gone wrong?

People Outside the US Think All Americans Own These Home Items
Shannon Quinn - November 22, 2022

My Mom is a Professional Home Organizer, This is What She Taught Me
Shannon Quinn - October 14, 2022
Advertisement