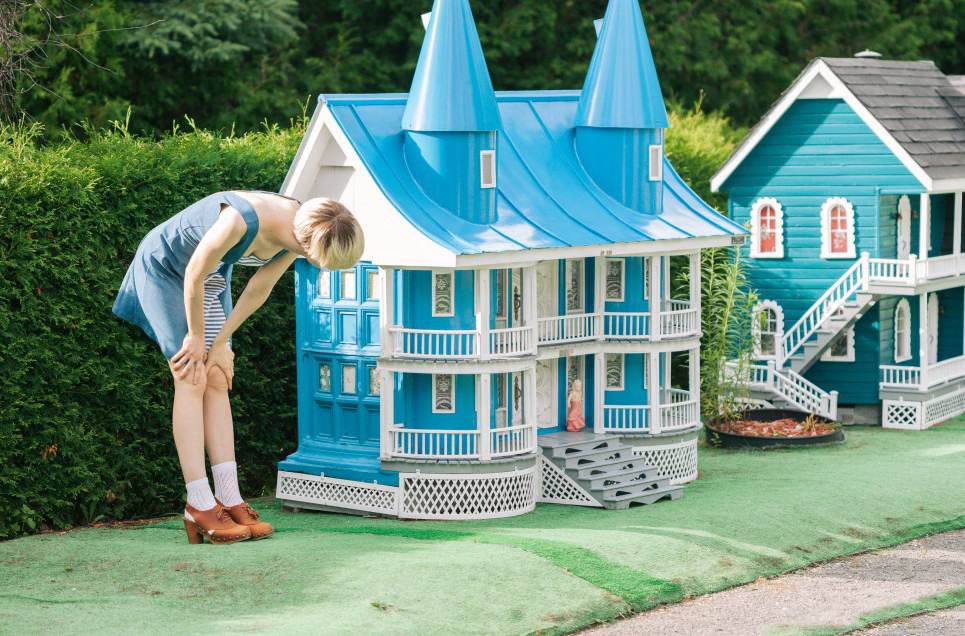 The Adventure House by Rainbow Play Systems in Surrey, United Kingdom created an amazing little place for kids to play that includes a house, as well as an airplane and jeep. Inside the house, there is fully working electricity and plumbing so that kids can use the bathroom. There is even a bedroom if any of your kids wanted to have a sleepover with their friends, they could stay in this tiny house.

According to the Daily Mail, this house costs £55,000, which is $71,596. In the article, the make the point that the cost of this playhouse is equal to an actual house in Liverpool. Here in the states, you’d be hard-pressed to find a house for $55,000 that was actually liveable, but you could easily find a nice mobile home for the same amount of money.

This next playhouse is a DIY project of epic proportions. A woman named Amy writes a blog called Her Tool Belt, where she explains how she made this farmhouse toy room every step of the way. Instead of building the playhouse outside, she chose to create this in her basement. This is an amazing idea, because her daughter can enjoy the playhouse with the benefit of heating and cooling while being inside. There is also no chance that you will open the door one day to find a wasp’s nest or a spider web.

Sine she was doing this on her own, the project took a total of 6 weeks. On her blog, there is a full step-by-step tutorial where she breaks down exactly how much lumber she used, as well as the cost of materials. It’s possible for you to do the same using her blueprints and instructions. She also has a YouTube video showing a tour of the house.

10. The Boyd House in Michigan

For an entire calendar year, a father named Adam Boyd from Highland, Michigan spent every day after work creating a playhouse for his two daughters with his own hands. His girls Avery and Violet even helped him with the project whenever they could. At first, Boyd planned a modest playhouse, but as time goes on, he continued to have more and more ideas as to what he wanted for his girls. Since Boyd has a remodeling business called ATB Building, he had the knowledge and skillset to get everything done.

The playhouse has electricity, hardwood floors, a kitchen, heating and cooling. Essentially, this is very much a tiny house with an attached rock climbing wall, porch, and so much more. During an interview, Boyd said, “I wanted to do something special, something they would be proud of and one day tell their friends that their dad built this for them.” If you are interested in seeing footage of the playhouse, watching this video on YouTube.

9. The Chateau in Wexford, PA

This castle playhouse design is one of the many amazing creations from Lilliput Houses. While it’s not confirmed, we have a strong inkling that they were behind the creation of Kylie Jenner’s house for Stormi, because their house seems to be a variation of what you can find on the company website. While we don’t know very much information about the owner of this castle, we do know that it is from Wexford, Pennsylvania, and that the daughter looks positively tiny sitting in front of her huge playhouse.

Since Lilliput Houses makes custom playhouses to suit the needs of the customer, every order will be a different price. They also offer entire villages full of little store fronts, which most people use in their businesses. They are willing to build-to-order and ship anywhere in the world. If you want to inquire about pricing, you would have to contact the company directly.

In the story of Peter Pan, it describes Tinkerbell’s house to be made out of branches and other natural foliage found in the forest. This was the inspiration behind the design of the Tinkerbell Treehouse by Tiny Town Studios. The center of the house is supported by a concrete tree, and the little shack has its own porch and walkway surrounding the cottage. There is even a working water wheel and pond design to add to the magical ambiance of the Tinkerbell house.

On their Etsy listing, it says that this treehouse costs $40,000, and that doesn’t include the additional expense of installation and shipping. In a lot of states, you can buy an entire trailer home for that amount of money. But for a wealthy parent who wants to give their child a magical experience, it is worth every penny.

This impressive playhouse is in the backyard of a mansion sitting along the Hudson River in New York. The property has the main mansion, a guest house, as well as a playhouse that has been constructed to look like a Greek Temple. Inside of the playhouse, you can see that it has been changed to suit the needs of the kids who have grown up. Instead of toys, there is a ping pong table, as well as a piano standing in the opposite corner of the room. Above the library shelves of books, there is a second story loft space.

Since the property was so large, the playhouse has its own bathroom, in case anyone has to go. There is also a small kitchen, which is perfect for having drinks and snacks with your friends. The great thing about this playhouse design is the fact that the owners had longevity in mind. Instead of creating a playhouse that was only useful when their kids were young, this Greek Temple transitioned extremely well to being a perfect party spot for teenagers and young adults. Architectural Digest has an amazing walkthrough video on YouTube if you are curious to see the entire property. They never mention how expensive it was to build this playhouse, but it is part of why the property is worth a whopping $9.5 million.

If your kid dreams of becoming a knight of the round table, or if they snuck in some not-so-age-appropriate episodes of Game of Thrones, this next Castle Fortress playhouse is the perfect fit for their epic fantasies. One of the towers actually has 3 stories, which is a show-stopper whenever your kid’s friends come to visit. This design includes cannon fire towers, a bridge to talk to the second tower, as well as a slide, and rock wall.

Designed by Tiny Town Studios, and their Etsy shop has this listed for $37,500. The price could go up or down, depending on the features you wanted to have on the castle fortress. Since this is so expensive, they suggest that it might be good as a playground for business owners and parks. However, if you can afford it, there’s no reason why you shouldn’t have one for your kids.

Many of the playhouses we have mentioned on this list were designed and built by a team that comes to your home to create a custom structure. But what about people who enjoy a bit of DIY? This next playhouse is actually designed by the Little Cottage Company, and it’s available to purchase online as a kit for $8,086.

The front of the house looks like a Victorian mansion with plenty of windows for natural light, as well as adorable window boxes where you can plant flowers. The back has a large barn door to help bring furniture and large toys in and out of the house. Inside of the house, everything will be bare wood, so if you decide to add drywall, carpeting, or furniture, those are all things that need to be purchased separately. Since you can purchase it through Amazon, they have a built-in feature that allows you to apply for financing.

The “Pirate Rapunzel” tree house by Tiny Town Studios combines the whimsical touches of a castle with the adventure of the deep blue seas. The designers make sure they they customize these playhouses to suit what their clients want, so it is possible to get a custom-built playhouse made to order. This playhouse has a slide, a rope ladder, rock wall, swing set, as well as Rapunzel’s golden hair falling out of the tower.

On Etsy, this Pirate Rapunzel tree house is listed on Etsy at $44,000. While this might sound outrageously expensive, you need to keep in mind that this company is willing to travel to any part of the United States to make this tree house. They will have to hire professionals to use forklifts and cranes, as well as potentially leveling the terrain of your land in order to make this tree house a reality.

Earlier on this list, we mentioned how some parents prefer to have an indoor playhouse, because it’s easier to insulate and keep clean. A good option that you might consider is transforming a child’s bedroom into a playhouse and a bunk bed in one. This Lady Unicorn Bed is shaped like a fairytale castle. On one end, there is a winding staircase that leads to the top bunk, but it also allows kids to wake up in the morning and go down a slide. And, of course, kids could have a blast inviting their friends over to use the slide as often as they wanted.

This bed is listed on Etsy for $6,524. The beds are made-to-order, so you could choose the colors that you prefer, as well as the additional trimmings like the Unicorn head or crown molding. They are also able to make custom name plates that will say anything you like, so it could have the name of your daughter attached to the castle, so that she knows it’s a home of her own. This company called The Luxury Interiors Store is located in The United Kingdom, so shipping costs could drastically increase the cost, depending on where you live.

The Hillybilly Hampton House is a 2-story playhouse with a garage attachment designed by Tiny Town Studios. This house has a rustic look that is purposely crooked, to give it a whimsical Hillbilly vibe. Not only do you get an entire house, but there is also a 12×12 foot front deck. The interior has a second-story loft with a ladder, as well as a balcony. On the side of the house, you can choose between installing a slide or a zip line. Swings are made of sturdy timber beams, which would last a long time. Tiny Town Studios has thought of everything, because they made sure the garage and front double doors are large enough to fit toy furniture that you need to move in.

This Hillbilly mansion is listed on Etsy for $14,000, which is significantly cheaper than some of the other homes they sell. However, this does not cover the cost of shipping. They charge $2.40 per mile for most American destinations locations, and you would have to call to get an exact estimate. Since they are located in Houston, Texas, it could easily mean tacking on an additional few thousand dollars just to get this delivered to your backyard.

Earlier on this list, we already showed the unicorn princess castle bed. This medieval style castle fortress bed is a bit more masculine, meant to fit into a boy’s bedroom. In one tower, there is a staircase that leads up to the top bunk, and the second tower serves a closet. The designers, Luxury Interior Store, is willing to paint the castle any color that you like, as well as add extra features and custom nameplates.

The photos that were provided are 3D renderings, so this is a design that has yet to be built. On the Etsy listing, it costs $6,524. While this design is amazingly cute, the one and only issue is that boys are likely to outgrow this pretty quickly once they enter middle school. Even the designers suggest using this for a themed hotel room or AirBnB listing, rather than a bedroom.