The Crazy Life of Extreme Couponers 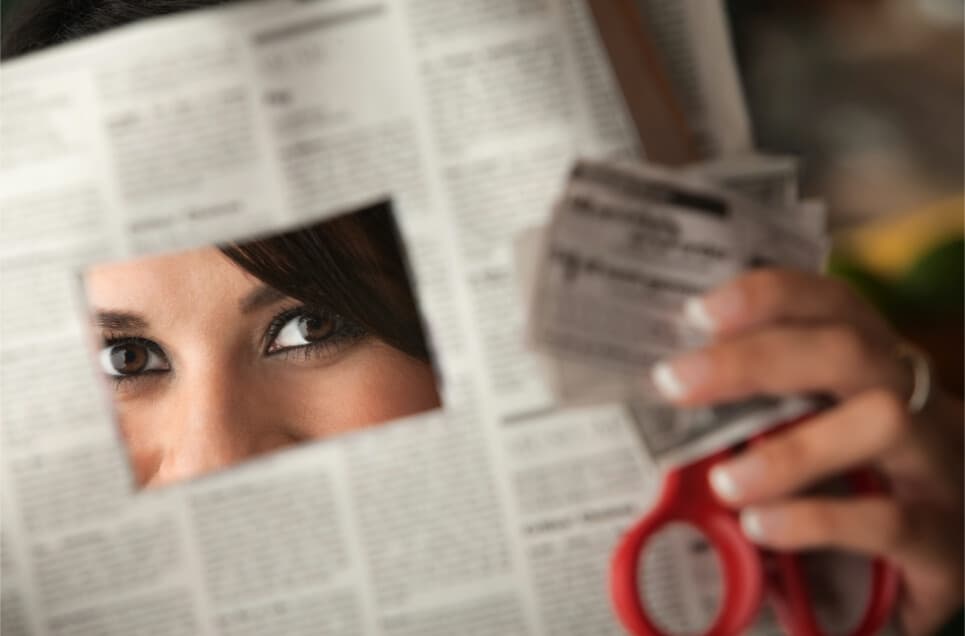 DO: download cash-back apps! Cash-back apps really are quite straightforward. Your shopping trip does not need to be impacted; all you have to do is upload a picture of your receipt (or forward your email receipt) and earn points! Once you reach a certain number of points, redeem it for cash or gift cards! It is literally free money. The catch here is that these apps are most likely selling your shopping habits to marketing and data research companies, but your credit card companies are probably doing that anyway, so you might as well get some money out of the deal.

Also, do know where to find coupons. Make sure that in your search for coupons, you’re not signing up for shady sites. Spam is not welcome! Plan your weekly meals around sale products when you are starting. That way, you can take advantage of existing sales without needing to coupon right away – you can build your coupon stash in the meantime. Make sure you build up your digital coupon collection too. Coupon apps are also great repositories if you can’t imagine cutting up paper coupons, though those are a great source of savings.

9. More Couponing Do’s To Save Time and Money!

DO: sign up for store rewards! These are usually free programs associated with your email or phone number and provide instant savings at the cash register. The sales will be in the weekly ad, so you can plan and combine those prices with coupons for better deals. Also, do learn different store policies. Does your favorite grocery store accept double coupons? Do they price match their competitors? If so, does it have to be online or in a printed ad, and is there a time limit? Do they accept competitor coupons? Maybe they give rainchecks! All that information should be readily available either online or at their customer service desk. Many stores have particular rules about each of these categories, so it would benefit you to know these policies when planning your coupon coup.

DO: make a shopping list. Going off-script can wreak havoc on your well-thought-out plans! You’ve spent all this time clipping and searching and organizing; don’t ruin it by falling victim to the store’s marketing tactics. Get in and get out with exactly what you need and what you have on your list, with your coupons intact. Shop during less busy hours like during the week or at night to avoid crowds; this will reduce the amount of time you’ll have to spend inside the store. Make sure you also do learn your local sales cycles! As you learn the pricing patterns of the different stores in your area, you can be more selective and strategic about where you spend your hard-earned money.

DON’T: buy something just because it is on sale! Sale prices can be tempting and can even create a sense of urgency. Don’t waste your money by buying everything that looks like a great deal; that can significantly hurt your wallet and defeat the whole purpose of couponing. Also, Don’t use each coupon you see! Not every coupon means you’re getting a deal. $0.50 off two boxes of brand-name cereal is just $0.25 off each box. You’re probably better off waiting for them to go on sale, whether or not you’d be able to use that coupon with it. Or if you can tolerate generic brands, that’s more likely a better deal with or without a coupon. Couponing isn’t about getting a discount on specific items necessarily; it’s about saving money overall.

DON’T: skimp on coupon sources. Multiple newspapers mean multiple coupons. Yes, you remember newspapers, right? Not everything is through the internet these days! Local businesses might give you (or sell you) leftover Sunday newspapers, or maybe you can get them from friends who don’t need them. However, let’s not so easily forget that online resources are great too. Feel free to follow different coupon people, or sites with great offers.

DON’T: waste time on coupons you won’t use. Know thyself. If you won’t use a coupon or don’t need it, don’t print or clip it. Save your time; time is money! There is no need to waste your energy on a coupon for items you don’t need. Don’t be like the mustard couponer who bought dozens of mustard bottles even though her husband doesn’t even eat mustard. How are you going to go through all that? Yes, donating is an option, but make sure you buy the essentials you need before buying items to donate or stockpile.

Also, DON’T: focus on brands. The brand name may be a big deal in some areas of life, but when it comes to grocery shopping, you’ll need to forget brand loyalty. Deals are king in couponing. If you can’t stand anything but a specific kind of toilet paper, for example, keep a lookout for coupons and buy in bulk when it goes on sale! The items that go on sale or have coupons may not always be the ones you prefer, but if saving money is your goal, you have to adapt and be flexible.

6. The History of Extreme Couponing

You may be wondering what started this whole craze. Yes, the idea of saving money has been around since, well, money was invented. However, the concept of couponing hasn’t been around for that long. Extreme couponing started as an article mentioned in The Wall Street Journal in March 2010 about an extreme sport that combined shopping with couponing to save as much money as possible while buying the most groceries.

TLC then started a TV show entitled Extreme Couponing about shoppers who make very extensive use of coupons. Despite mixed reception from critics, the show was renewed for a second, third, fourth, and fifth season. For many, it could be viewed as a guilty pleasure like many reality TV shows. Mostly the show has received regular criticism from consumer and coupon blogs about coupon misuse, such as using coupons for incorrect items, the use of counterfeit coupons, and encouraging compulsive hoarding.

Numerous shows have been rumored to have gone along with whatever deals the show needed them to be featured. Many examples where the profiled “extreme couponers” received massive discounts showed that, in reality, their haul would not have been as fruitful. The store doubled every shopper’s coupon in one particularly badly-scripted shopping haul, but their normal policy was very far from that. The outcry was so significant that they had to post a statement to their Facebook in an attempt to mollify their outrage. In reality, most grocery stores will not double coupons or restrict how many coupons can be combined; sometimes, sales items cannot be used with a coupon. Almost all stores will have some type of policy about their coupons, sales, and the number of coupons that can be used. It is a fact that tends to be forgotten on these extreme couponing shows.

The original special came out to much controversy and pushed the boundaries of acceptable and even legal coupon usage. The first four participants of the pilot didn’t know what they were getting into. It was initially pitched to them as a “What Not to Wear” for coupons – essentially an educational how-to guide on saving money after being severely hit by a recession. Instead, it turned into a spectacle of ‘who can push this the furthest,” much to the disappointment of the participants. Later, participants understood the assignment and played into the “kooky spendthrift” stereotype. However, many of them went on record, later on, to say it was essentially a persona and that they were not true to their actual shopping habits on the show.

4. Extreme Couponing Doesn’t Tell You How Long it Takes to Become a Pro

The show usually features people who have become experts at couponing, but it doesn’t tell you how long they had to work to become proficient. For example, extreme couponer Stacy Fout said that she only had recently reduced her prep time to four to six hours after working at it for six whole years! She added that if you aren’t strategic, you could spend more gas money than you save.

Besides, the show was often unrealistic in its shopping portrayals. The shopping on the show is pretty near impossible to do in reality. Stores can close down for filming or reduce the number of other shoppers, reserve a special aisle for checkout, and sometimes even allow the TV couponer to buy pre-order what they would need to have it available in advance. The real world doesn’t work like that!

One show even stated that they made a “poor decision by participating,” and many stores felt like they struggled after featuring in the show. Unfortunately, the show made it seem like stores have no couponing policies, which can be quite unrealistic and lead to serious confusion for inexperienced couponers. Then, there were reports of coupon theft after the show! And, this crime really grew.

The show touted that you could only save money if you had enough coupons, which undoubtedly led misguided (and criminal) couponers to steal newspapers! Some reactions were so intense that newspapers even noticed a rise in coupon theft, specifically from newspapers that held the highest coupon value. Even though there were only five seasons of the show, you can still catch reruns on the air today, and as you know now, there were intensely split reactions as a result of the show.

2. Claims of Scripted Shows About Couponers

One former participant explained that their entire show was entirely scripted and not just removing inappropriate phrases, for example. “The entire show is scripted,” they said. “The producer handed us coupons to give to the store and told us what to say,” they went on. Disappointing, but not unheard of considering the world of reality TV. Joanie Demer, a participant on the show and the co-founder of The Krazy Coupon Lady website, was featured on several media appearances, which is how Extreme Couponing producers found her.

In her episode, she bought four carts worth of groceries, stating, “it was completely insane!” She explained that it took months of planning, even writing to manufacturers to request coupons for discounts and free products. She even added a disclaimer: “It’s fun to flex your muscles and get to say, ‘look what I can do.’ That’s cool, and it made for great TV, but that was in no way a realistic portrayal of the amount of money that you can save on any given week couponing.”

1. What Has Changed About Couponing?

Some changes, like more restrictive coupon policies, were direct results of the show, while others were due to the available technologies. Digital coupons and cash-back or rebate apps are just a few examples of new technologies that have revolutionized the couponing world. A decade ago, a show about spending over forty hours a week clipping and organizing coupons to save hundreds or even thousands of dollars was a see-it-to-believe-it phenomenon. As the series progressed, the shopping trips became more and more outrageous as each of the participants in the episode needed to outdo the previous shoppers.

Yes, couponing has changed in many ways due to the show. However, some of the biggest changes aren’t related to the show at all. You may not be able to use 20 coupons and get 73 free mustard bottles today, but you can still stack coupons and save a good amount of money, then use a cash-back app for additional rebates after the fact. Today, there is a newer generation of couponers that may have never even seen Extreme Couponers. Couponing today is more about strategically spending a little bit of extra time on saving money. However, there will always be a subset of die-hard couponers that will walk around with their clipped coupons in organizers!